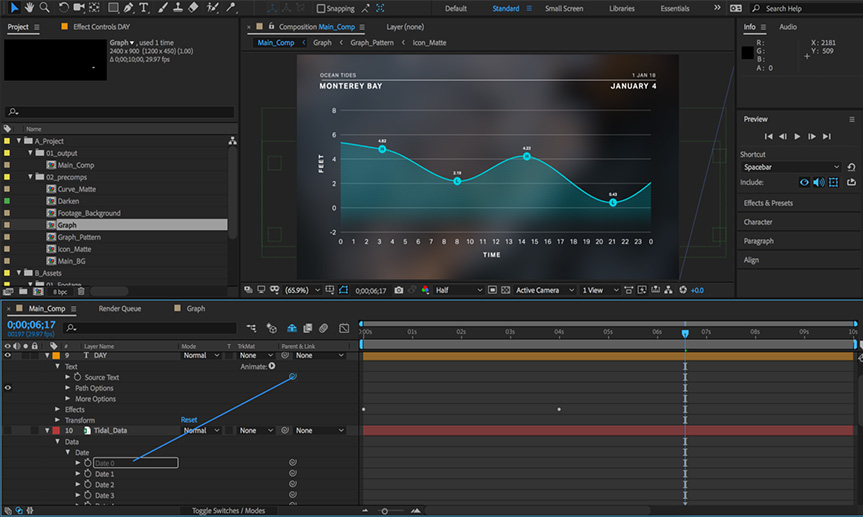 Description of Adobe after effects CC

Adobe After Effects is primarily used for creating motion graphics and visual effects.
After Effects allows users to animate, alter and composite media in 2D and 3D space with various built-in tools and third party plug-ins, as well as individual attention to variables like parallax and user-adjustable angle of observation.
After Effects and some non-linear editing systems (NLEs) are layer-oriented, meaning that each individual media object (video clip, audio clip, still image, etc.) occupies its own track.
In contrast, other NLEs use a system where individual media objects can occupy the same track as long as they do not overlap in time.

This track-oriented system is more suited for editing and can keep project files much more concise.
The layer-oriented system that After Effects adopts is suited for extensive effects work and keyframing.
Although other compositing packages, especially ones that employ tree or node workflows, such as Nuke and eyeon Fusion are better suited to manage large volumes of objects within a composite, After Effects is able to counter the clutter somewhat by selectively hiding layers (using the Shy switch) or by grouping them into pre-compositions.


The main interface consists of several panels (windows in versions prior to After Effects 7.0).
After Effects shares many features with other Adobe programs, such as creating circles, squares and free form shapes that are defined by bezier curves.
Like Photoshop and Illustrator, After Effects can import and manipulate many image formats, and filters and adjustments can be added. After Effects integrates with other Adobe software titles such as Illustrator, Photoshop, Premiere Pro, Encore, Flash, and third-party 3D programs like Cinema 4D, Lightwave 3D, and Autodesk 3ds Max.

Dive into the world of motion graphics, keying, and compositing in After Effects CC.
In this course, Henry A.K.A - Kiwasonic lays out six foundations for becoming proficient with After Effects, including concepts such as layers, keyframe animation, and working with 3D, To help you get up and running with the program, the course begins with a project-based chapter on creating an animated graphic bumper.
- Next, explore the role layers play in compositions and find out how to add style to your projects using effects and graphic elements.
- Last, see how to build 3D objects with CINEMA 4D Lite, as well as stabilize footage,
- solve for 3D cameras, and paint in graphics with the Reverse Stabilization feature.