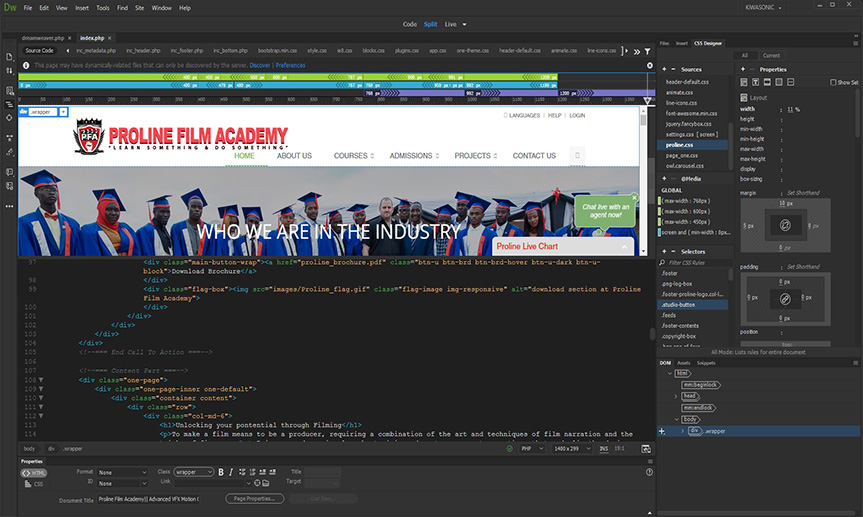 Adobe Dreamweaver CC is one of the most popular professional web design programs available.
It offers a lot of power and flexibility for both designers and developers.
There are many features, which can make it intimidating, but it is relatively easy to pick up and start using now that Adobe has improved the onboarding experience to help beginners.
The advanced features make it possible to go from beginning web designer to professional in a short period of time.
You can choose to design visually or by using code.

Adobe Dreamweaver is a proprietary web development tool from Adobe Systems.
It was created by Macromedia in 1997 and developed by them until Macromedia was acquired by Adobe Systems in 2005

Dreamweaver CC is a WYSIWYG editor and code editor for Windows PCs and Macs.
You can use it to write HTML, CSS, JSP, XML, PHP, JavaScript, and more.
It can read WordPress, Joomla, and Drupal templates, and it includes a grid system to do grid-based responsive layouts for three different device sizes at once
—convenient for developers who work on desktop, tablet, and cell phone browsers.
Dreamweaver offers a lot of tools for mobile web development including creating native apps for iOS and Android devices.
There's no shortage of things you can do with Dreamweaver.

Adobe Dreamweaver CC is a web design and development application that combines a visual design surface known as Live View and a code editor with standard features such as syntax highlighting, code completion, and code collapsing as well as more sophisticated features such as real-time syntax checking and code introspection for generating code hints to assist the user in writing code.
Combined with an array of site management tools, Dreamweaver lets its users design, code and manage websites, as well as mobile content.
Dreamweaver is an Integrated Development Environment (IDE) tool.
You can live preview of changes for the frontend.
Dreamweaver is positioned as a versatile web design and development tool that enables visualization of web content while coding.

Dreamweaver, like other HTML editors, edits files locally then uploads them to the remote web server using FTP, SFTP, or WebDAV.
Dreamweaver CS4 now supports the Subversion (SVN) version control system.
Since version 5, Dreamweaver supports syntax highlighting for the following languages out of the box:

Computer and Mobile Platform Capability Before you write code, Dreamweaver encourages users to understand the different design techniques necessary when displaying content across mobile phones, tablets, and desktop browsers.
Developers who work on websites for both computers and mobile platforms can preview their sites on multiple devices at the same time to see the effects of their page edits in real time.

Please follow this link to know more about this software in our Advanced Web Designing Course with Dreamweaver CC.