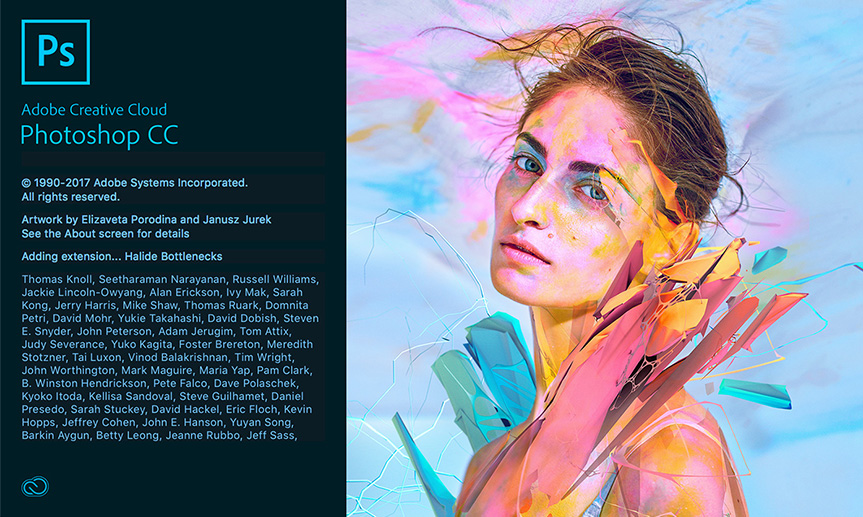 Adobe Photoshop is a raster graphics editor developed and published by Adobe Systems for Windows and OS X.
Photoshop was created in 1988 by Thomas and John Knoll. Since then, it has become the defacto industry standard in raster graphics editing, such that the terms "photoshopping" and "Photoshop contest" were born.
It can edit and compose raster images in multiple layers and supports masks, alpha compositing and several color models including RGB, CMYK, Lab color space (with capital L), spot color and duotone. Photoshop has vast support for graphic file formats but also uses its own PSD and PSB file formats which support all the aforementioned features.

In addition to raster graphics, it has limited abilities to edit or render text, vector graphics (especially through clipping path), 3D graphics and video.
Photoshop's featureset can be expanded by Photoshop plug-ins, programs developed and distributed independently of Photoshop that can run inside it and offer new or enhanced features. Photoshop's naming scheme was initially based on version numbers.
However, on October 2003, following the introduction of Creative Suite branding, each new version of Photoshop was designated with "CS" plus a number; e.g. the eighth major version of Photoshop was Photoshop CS and the ninth major version was Photoshop CS2.

Photoshop CS3 through CS6 were also distributed in two different editions: Standard and Extended.
In June 2013, with the introduction of Creative Cloud branding, Photoshop's licensing scheme was changed to that of software as a service and the "CS" suffixes were replaced with "CC". Historically, Photoshop was bundled with additional software such as Adobe ImageReady, Adobe Fireworks, Adobe Bridge, Adobe Device Central and Adobe Camera RAW.
Alongside Photoshop, Adobe also develops and publishes Photoshop Elements, Photoshop Lightroom, Photoshop Express and Photoshop Touch.
Collectively, they are branded as "The Adobe Photoshop Family".

Please follow this link to know more about this software in our Advanced Still Photography Course with Photoshop CC.

In 1987, Thomas Knoll, a PhD student at the University of Michigan began writing a program on his Macintosh Plus to display grayscale images on a monochrome display.
This program, called Display, caught the attention of his brother John Knoll, an Industrial Light & Magic employee, who recommended that Thomas turn it into a full-fledged image editing program. Thomas took a six-month break from his studies in 1988 to collaborate with his brother on the program.
Thomas renamed the program ImagePro, but the name was already taken. Later that year, Thomas renamed his program Photoshop and worked out a short-term deal with scanner manufacturer Barneyscan to distribute copies of the program with a slide scanner; a "total of about 200 copies of Photoshop were shipped" this way. During this time, John traveled to Silicon Valley and gave a demonstration of the program to engineers at Apple and Russell Brown, art director at Adobe. Both showings were successful, and Adobe decided to purchase the license to distribute in September 1988.

While John worked on plug-ins in California, Thomas remained in Ann Arbor writing code.
Photoshop 1.0 was released on 19 February 1990 for Macintosh exclusively.
The Barneyscan version included advanced color editing features that were stripped from the first Adobe shipped version.
The handling of color slowly improved with each release from Adobe and Photoshop quickly became the industry standard in digital color editing.

At the time Photoshop 1.0 was released, digital retouching on dedicated high end systems, such as the SciTex, cost around $300 an hour for basic photo retouching.
Because of Photoshop's popularity, PSD files are widely used and supported to some extent by most competing software.
The PSD file format can be exported to and from Adobe's other apps like Adobe Illustrator, Adobe Premiere Pro, and After Effects, to make professional standard DVDs and provide non-linear editing and special effects services, such as backgrounds, textures, and so on, for television, film, and the web.

Photoshop's primary strength is as a pixel-based image editor, unlike vector-based image editors.
Photoshop also enables vector graphics editing through its Paths, Pen tools, Shape tools, Shape Layers, Type tools, Import command, and Smart Object functions.
These tools and commands are convenient to combine pixel-based and vector-based images in one Photoshop document, because it may not be necessary to use more than one program.
To create very complex vector graphics with numerous shapes and colors, it may be easier to use software that was created primarily for that purpose, such as Adobe Illustrator or CorelDRAW. Photoshop's non-destructive Smart Objects can also import complex vector shapes.