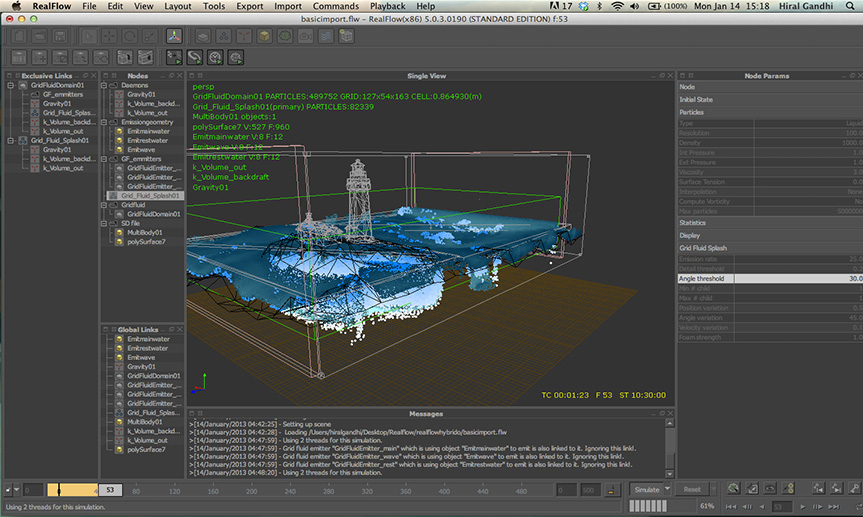 Description of Realflow by Next Limit Technologies:

RealFlow was the first and remains the definitive tool for creating impressively accurate realistic fluid simulation software in the industry.
RealFlow is a fluid and dynamics simulation tool for the 3D and visual effects industry, developed by Next Limit Technologies in Madrid, Spain.

This stand-alone application can be used in conjunction with other 3D programs to simulate fluids, water surfaces, fluid-solid interactions, rigid bodies, soft bodies and meshes.
In 2008, the Next Limit Technologies was awarded a Technical Achievement Award by the Academy of Motion Picture Arts and Sciences for their development of the RealFlow software and its contribution to the production of motion pictures.

In 2015, Next Limit Technologies announced the upcoming release of RealFlow Core for Cinema 4D.
RealFlow technology uses particle based simulations, These particles can be influenced in various ways by point-based nodes (daemons) which can do various tasks such as simulate gravity or recreate the vortex-like motion of a tornado.
RealFlow can also simulate soft and rigid body collisions and interactions.

The inclusion of Python scripting and C++ plug-ins allows users to program their own tools to improve RealFlow capabilities, adding control to most aspects of the RealFlow workflow including batch runs, events, daemons, waves and fluids.
The RealFlow Renderkit (RFRK) is a set of tools designed to facilitate the rendering of fluids.

The RFRK enables the generation of procedural geometry at render time and the rendering of individual fluid particles.
With this interface, fluids can also be rendered as foam and spray.

Learn how to simulate soft bodies in a physically accurate way with RealFlow.
Soft bodies are a great way to model soft, malleable surfaces, especially ones that collide with other objects. In our course you'll concentrate on RealFlow's soft bodies dynamics system, jumping back and forth between Cinema 4D and After Effects following a realistic production workflow pipeline.

Please follow this link to know more about this software in our Advanced 3D Animation Course with Cinema 4D.

On July 30th, 2015 RealFlow 2015 was released to the public.
The main features in this major release include: